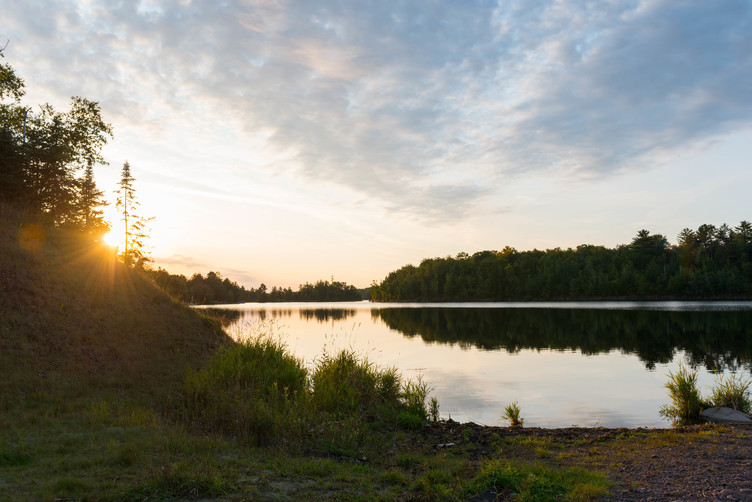 During the warm months, locals say to get out on—or, better still, in—one of Minnesota’s famous lakes. Rent a pontoon boat, kayak, paddleboard, or canoe and go exploring. “Going out on the water in the summer is like being in a sauna and then jumping into a cool plunge pool,” we’re told. It’s certainly refreshing, and the award for most unexpected Iron Range activity goes to…? Scuba diving in a former iron mine! The go-to spot for lake diving is the aptly named Lake Ore-be-Gone. (The Minnesota Department of Natural Resources maintains a lake access map, from boat launches and beaches to dive spots, on its website.) The 132-meter (433-foot) deep former mine is now home to the Minnesota state fish, the walleye, northern pike and trout—and is the final resting place for sunken mining equipment, airplanes, and a helicopter. Take that, Bermuda!

Spending the day toiling underground makes a person hungry. Cornish-style pasties—a traditional miner food that’s conveniently hand-held, warm and filling—can be found throughout Midwestern mine country. In the Iron Range, Betty’s Pies has been a local institution since 1957. Started as a fish shack, this roadside restaurant has grown into a destination for its huge selection of cream pies, crunch pies, baked pies, cheesecakes (still a pie) and even pie milkshakes: a shake with an actual slice of pie added into the mixer.. Naturally, Betty’s serves pasties: traditional hand pies made with either roast beef or diced chicken, rutabaga, potatoes, carrots, onions and seasonings—a hearty, dough-encased stew—with gravy on the side. And since you’re eating miner food, why not take a mine tour?! The Soudan Mine, opened in 1882, was the first iron ore mine in the state. The “Cadillac of Mines” (so fancy!) has been closed since 1962, but you can reach the mine’s deepest depths just as the miners did: in a closed cage that descends a .8 km (a half-mile) underground, followed by 1.2 km (three-quarters of a mile) by rail. It’s a thrilling trip!

From Europe With Love

Settled by Finnish, Swedish, and Scandinavian populations, the Iron Range is proud of its Northern European traditions, from festivals where you’ll hear traditional folk music—polkas and waltzes, schottishes and obereks—to the region’s quintessential dishes. To sample some of the area’s more unusual offerings, such as lutefisk, you may have to seek out a church dinner—the pungent, gelatinous, lye-preserved white fish has apparently fallen out of favor with the younger generation. Who knows why? Other European imports have fared better. At Kunnari’s Kitchen in Virginia, Minnesota, the krupsua (traditional Finnish pancakes) are a hit. (As are the farm’s u-pick strawberries in summer.) In Hibbing, the 105-year-old Sunrise Bakery—opened by a Roman baker in 1913—makes another classic Iron Range dish, albeit one brought to the region by Croatians, Slovenes, and Serbian immigrants. Potica (pronounced po-TEE-tsa) is an improbably thin cake that’s stuffed with butter, nuts, sugar and honey and rolled 30 to 40 times. A traditional Central European desert, being prepared by a multigenerational Italian-American family, in Northern Minnesota—now that’s cultural cross-pollination at its finest.

One of the longest paved trails in the country, the 217-kilometer (135-mile) Mesabi Trail, runs through the Iron Range. Built on old mining and log-haul roads and former railroad tracks, this wide and well-maintained path travels through rolling hills—many mountains man-made from the upturned earth of iron mines—and forests alive with wildlife. The trail makes a great bike path through the region for a summertime tour. In the winter, switch to a fat-tire bike or strap on some snowshoes or cross-country skis. If you want to do a one-way trip between towns, there’s even a shuttle service that will pick you up at the end of a long ride, return you to your hotel or campsite, so you don’t have to retrace your route if you don’t want to.

To really experience the Iron Range’s wilderness, it’s best to get outdoors—not just for the day, but overnight, when the skies open up in a full display of stars. Near Hibbing, McCarthy Beach State Park has a well-maintained campground right on the water, a .8-kilometer (half-mile) sandy beach, hiking trails, a boat launch, and fish-cleaning building for gutting and scaling dinner. Yum, yum. During the colder months—or if you’re feeling fancy—reserve one of the historic, beautifully restored rental homes from Green Gate Guest Houses. There’s a log cabin built by Finnish craftsmen in 1890 and updated by a Norwegian engineer in 2015 and a 5.5x10-meter (18x32-foot) miner’s house made of hand-hewn logs with a second-story addition and a “period-correct exterior” and metal roofing, artfully rusted. It’s like stepping into the 1800s, but with in-floor heating and cushy amenities.